Blockchains are already changing the way our financial industry works. Almost everything in the financial system has been updated and has been transformed with blockchain technology. Nevertheless, properties such as immutability and trustlessness are not only useful in monetary applications. Another potential candidate that is ripe for disruption by this technology is governance. In fact, this technology is being incorporated in Wyoming through the Decentralized Autonomous Organization.

Not sure what this is all about? This article would explain all you need to know about DAO (Decentralized Autonomous Organization) and what it has to do with blockchain.

What is a Decentralized Autonomous Organization or DAO?

DAO is the acronym for Decentralized Autonomous Organization. This is an organization that is governed by computer programs and codes. And this system has the ability to function autonomously where it does not need a central authority. This organization acts as a form of venture capital fund, based on an open-source code that does not have a traditional management structure or board of directors. Moreover, to be completely decentralized, the DOA was unaffiliated with any specific state even though it made use of the ethereum network.

Why make such an organization? Well, the developers of the DAO believed that they would be able to eliminate all the human manipulation and error of investor funds by placing decision-making power into the hands of the automated system and a crowdsourced process. In short, the DAO that is fueled by ether has been designed to permit the investors to send money from anywhere in the world anonymously. The Decentralized Autonomous Organization would then give these people tokens that would permit them to vote on possible projects.

The DAO was launched in late April 2016 after a huge crowd sale of tokens that helped raise more than $150 million in funds. During this time, the launch was the largest one through a crowdfunding fundraising campaign of all time. And why wouldn’t it be; it was a great idea and it was going to revolutionize the way things work (which has turned out true and would be discussed in this article further).

How does DAO work?

The DAO uses smart contracts to work with external information and execute commands. And all this done without any human intervention, which was the main aim of the organization. This means that no one has the authority to make and enforce decisions. The Decentralized Autonomous Organization is normally operated by a community of shareholders incentivized through some kind of token mechanism (just how it started). All the transaction records and rules of the DAO are stored transparently on the blockchain. The rules are normally finalized based on the votes from the shareholders.

Usually, the decisions in a DAO are made through proposals. So, when a proposal is voted on by most of the shareholders or fulfills some other set of rules as per the network consensus rules, then it gets implemented. In some ways, the Decentralized Autonomous Organization words a lot like a corporation or a nation-state. The only thing is that it operates in a more decentralized fashion. In short, DAOs do not have any hierarchy. The DAOs use the economic mechanisms to align the interest of the organization with those of its members through the use of game theory.

The members of the DAO are not tied by any formal contract. Instead, they are bound by a common goal and the network incentives that are tied to the consensus rules. All of these rules are transparent and are written in the open-source software that governs the organization. Moreover, since the DAOs operate without borders, they might be subjected to different legal jurisdictions.

To put in simple words, the Decentralized Autonomous Organization provides an operating system for open collaborations. This system permits the institutions and individuals to collaborate without having to know or trust each other.

What are the benefits and risks associated with DAOs?

Now that you are clear about what the DAO is about, let us talk about the Decentralized Autonomous Organization benefits and their risks to understand it better.

There are a lot of Decentralized Autonomous Organization benefits including:

So, what does Wyoming have to do with this? Well, a working group in the Wyoming legislature dedicated to blockchain technology and innovation has put a bill forward and is hoping to get it approved. If the bill gets approved, then it would allow the decentralized autonomous organizations to officially incorporate in the state. The Wyoming bill aims to permit DAQOs to be chartered in and recognized by the state authorities.

This bill was submitted to the government in mid-January. And as per the public records, the bill was given to the Wyoming Senate’s Joint Corporations, Elections & Political Subdivisions Committee on February 3. Wyoming’s Select Committee on Blockchain, Financial Technology, and Digital Innovation Technology then moved the bill to the state’s standing committee for re-reference for corporations. This committee would then report whether the Senate should move ahead and introduce amendments to the bill.

With this bill, entrepreneurs would be allowed to form LLCs or limited liability companies with the term DAO, LAO or DAO LLC in their official registry. Moreover, the existing LLCs in the state would also be able to become DAOs under the terms of the measure. The measure also covers the Decentralized Autonomous Organization that is algorithmically managed or member-managed. And the algorithmically-managed DAO can be formed under this chapter if the underlying smart contracts are able to be updated, modified, or upgraded.

As per this bill, the articles of organization would define the characteristics of the registered Decentralized Autonomous Organization’s structure, including the rights of participants and how the smart contract component would be subjected to change. So, if a smart contract is changed, the articles of association would have to be updated or amended.

In short, the proposed bill would act as a bridge between the real-world business operations and the general ethos of DAOs that aim to decentralize the organs of control and distribute them across the involved shareholders. The bill has not been finalized yet, and it is still not clear what demands are there for a Wyoming-registered DAO. But the state has pursued a positive policy stance toward the crypto space. So, you can accept it to be a thing and even work to convert your company or open a company with the DAO structure.

Looking to incorporate a Business in Wyoming?

Have an idea and what to turn it into your business? Well, IncParadise can help you with it. We have an office in Wyoming and are known to offer the best services in the state and country. IncParadise is one of the top registered agents and incorporation service providers here. In addition to this, we can help you with additional services like foreign qualification, EIN assistance, mail forwarding, DBA and so on. We can also assist you in incorporating the Decentralized Autonomous Organization registration. Contact us to know more today! 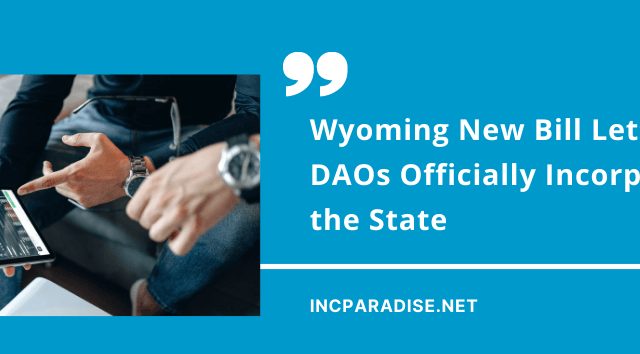 Best States to Incorporate a Company or LLC